To Mediate and/or Arbitrate? That is the Question. 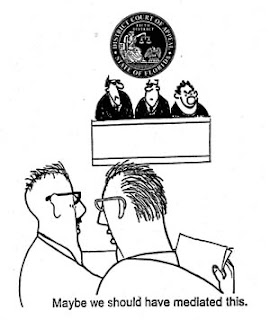 Alternative Dispute Resolution (“ADR”) is sometimes viewed as the latest, “trendy” way to resolve your case. ADR is generally a process that takes place outside the courthouse, although many courts now require parties to utilize ADR at some point before trial during a lawsuit. However, many parties are now leaving the courthouse completely out of the picture, and deciding to solely use some type of ADR, such as mediation or arbitration, to resolve or litigate their claims. ADR consists of several types of processes, but I am only focusing here on mediation and arbitration.

A mediation consists of the parties and their counsel, and a neutral third party known as the mediator. The mediator is not a decision maker, but assists the parties in amicably resolving the dispute. The mediator helps parties in developing settlement options, and may offer his or her opinion as to the strengths and weaknesses of a party’s case. Parties can agree to mediate their claims, or may be ordered by the court to mediate the case prior to trial or arbitration. Mediation is the ADR process in which the parties have the most control of their outcome, versus going to arbitration or court where an arbitrator, judge or jury makes the decisions. Parties often favor mediation because parties are able to mold unique settlements that may not be available in court or arbitration, Furthermore, the costs of mediation are typically less than the costs of litigating a claim in court or in arbitration.

Arbitration is conducted similarly to a trial, but is more informal and may not utilize the rules of evidence and procedure utilized in a trial. Generally, parties are able to mutually agree on an arbitrator, or at least strike potential arbitrators, whereas in a Texas court, you are assigned a specific judge. Parties also must give up their right to a jury trial in arbitration. Arbitration is typically binding and unappealable, although there are a few exceptions that allow arbitration to be non-binding or appealable. Once the arbitrator issues a final ruling, the prevailing party files it in court to effectuate a collectable, enforceable judgment.

Is Your Secret Sauce A Saucy Secret?

Americans love food. We also love the next biggest and best thing as far as…

THE DEVELOPMENT OF THE TEXAS NON-COMPETE: A TORTURED HISTORY